Not appearing in show

The Director is a 16 or 17 year old mixed race girl who is a popular movie director. She appeared only in Berrywood Here We Come and has speaking roles. She is voiced by Zoe Robb, who is also the singing voice of Raspberry Torte. Her friend and crush is Lime Light. Her fruit or dessert theme is unknown.

The Director is hard working and determined. She is willing to record one scene 200 times until it is done right. She's smart, clever, and a bit nerdy. She shows a lot of patience, being kind enough to deal with Lime Light even though she has changed into a brat even though she's not her old self. She is hopeful, and wished Lime Light would go back to her old ways. It is implied that she has known Lime Light for a long time, and she helped her get into the industry.

The Director has a shoulder length lavender ponytail with choppy bangs. Her skin is dark tan, darker than Ginger Snap's. She has violet eyes, and turquoise glasses that sit on her nose. She wears a dark purple cap that is worn backwards like Huck's and dark purple t-shirt over a long sleeve white t-shirt. Her pants are lavender and her shoes are purple. 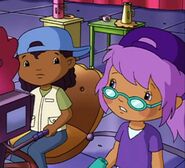