She shares her berry bungalow with her sister Apple Dumplin', her persnickety cat Custard, and her mischievous dog named Pupcake. In the 1980 rendition Strawberry was an only child and Apple Dumplin' was just one of her friends, while Pupcake was owned by Huckleberry Pie. In the 2009 version Strawberry calls Apple her cousin. She had a filly named Honey Pie Pony in the 2003 series.

Strawberry Shortcake is a cartoon character originally used in greeting cards, but who was later expanded to include dolls, posters, and other products.

Many of Strawberry Shortcake’s days are spent in the simple pleasures of tending Strawberry berry vines. Strawberry also likes to spend time with her friends, so she frequently visits nearby lands. Strawberry is always cheerful and is ready for helping her friends at any time.

In the 1980s, Strawberry was six years old. Her current age is never explicitly stated, but she is implied to be teenaged/young adult aged in her most recent incarnations e.g., in Year 4 of the 2003 version, Strawberry is able to drive a car and in the 2009 version, she owns a shop called the Berry Café.

Strawberry is a bright and energetic little girl. She is kind, loyal, and always ready to help a friend in need. She loves strawberries.

Not much is known about her personality due to the fact that there was no animated series but from the official art, it seems as though Strawberry enjoys dancing.

Strawberry Shortcake is good at sports. She also likes gardening, which is why there are a lot of large strawberries around her house. She loves her sister and never fails to share equal love towards both her pets. Whenever there is a big event in Strawberryland, you can bet that Strawberry Shortcake was the one who had the idea. Despair almost never appears in her dictionary, and when it does, it doesn't take long for her to regain her optimism. She likes singing and dancing, and she always does both whenever she has the chance. She is also a smart girl who can quickly find the right solution whenever a problem arises. She's also curious, eager to try something new, go to a place completely new for her, and make friends with a complete stranger. By the time of Year 4, her personality has matured, which is implied by her taking a part-time job and considering what her future career will be.

Strawberry loves hanging out with her friends in Berry Bitty City. While she runs her Berry Café, she's always willing to lend a helping hand or go on an adventure. Her optimism is contagious and she always sees big possibilities in everything!

The characters of the Strawberry Shortcake franchise have undergone several design changes. Strawberry was originally created in 1980, but THQ changed her in 1991. Strawberry's 1991 appearance was altered drastically in 2003. It changed again in Year 4 of the DIC series' run and in 2009 with the Berry Bitty City arc.

Strawberry resembles a rag doll. She wears a bonnet with strawberry prints on it. Her hair is naturally red and short. She wears a red maid dress with three green diamonds on the white cloth and kisses running down the cloth. She wears white and green striped leggings and white doily pants. Her hands are fingerless and she wears brown shoes.

Strawberry has no hat and has curly hair. She wears a pink party dress. She also has a headband on her head and has ballerina shoes.

Strawberry's appearance is that of a human. She has very scruffy red-orange hair. She now wears a white shirt with red stripes (which appear dark red in Year 3). with a pair of blue jeans. A red jumper is tied to her waist. Her muffin-esque bonnet has been replaced with a pink sun hat with strawberry prints and a red hatband with a strawberry clip on a green and white striped bow. She wears brown sneakers.

Strawberry wears a pink and white striped hoodie with a hot pink T-shirt underneath. She still wears jeans, but now actually much more detailed showing the fly and some kind of pocket on the sides. She has long, shoulder-length red hair. Her hat design has not changed, but the hat band now matches the bow's color. Her shoes are formal, pink girl shoes.

Strawberry's hat is replaced with a cap that resembles a strawberry, a green platform, and a button. She has very long flowing, magenta pink hair with very curly strands hanging lose above her curved strands going down to her waist. She wears a dress which is color halved (the top is white with green diamonds with a strawberry between; whereas the bottom half is pink with red polka-dots. Her leggings are white and green striped. She wears shoes similar to the shoes worn in Year 4.

She has a red knit hat, razzmatazz hair, a sleeveless white dress that has a strawberry print on it and the top ends match its color. She also has white-lime knee-high socks and strawberry colored sneakers with white trim. She also has green eyes. 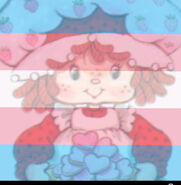 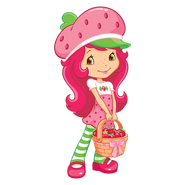 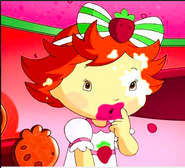 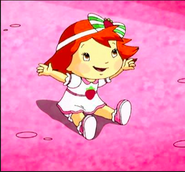 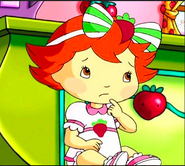 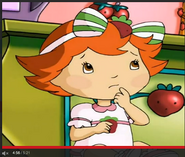 Add a photo to this gallery
Retrieved from "https://strawberryshortcake.fandom.com/wiki/Strawberry_Shortcake?oldid=9884"
Community content is available under CC-BY-SA unless otherwise noted.