Strawberry Shortcake Wiki
Register
Don't have an account?
Sign In
Advertisement
in: Characters, Outdated, Introduced in 2009,
and 10 more

Appearing on Strawberry Shortcake Berry In The Big City

"I know what you mean, Strawberry, but this book of scary stories is more chilling than the chilliest of storms!" 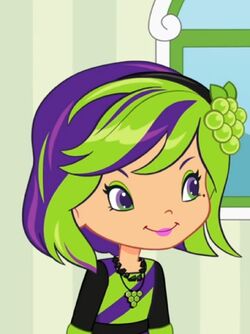 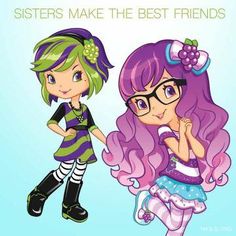 Sour Grapes is a punk teen girl introduced in 2015 in Season Four of Berry Bitty Adventures, and has the spotlight as a main character in the short-lived 2018 series of 2D animated YouTube special shorts. Her twin sister is Sweet Grapes and they run a food truck together. Her scheming cousin is Raisin Cane. This Sour Grapes is not a villain, thus being completely different from 1980s and 2003 Sour Grapes. She is tough, competitive, and butchy which makes her seem like the kinder 2009 version of Peppermint Fizz. The 2021 version is monotone, bland, and mostly mute, although she does show some emotion now and then. She rarely speaks with a thick Australian accent. Her style is more goth instead of punk now.

Sour Grapes is a pale skinned girl with ombre lavender and lime eyes. She has natural purple hair in a choppy bob, with lime green highlights. She has a black headband with a grape on it, her dress is green and purple striped with black sleeves. She has white and and black striped leggings, black combat boots, and layered necklaces. Sometimes, she wears black athletic shorts like when camping. She has a very punk and edgy style, and is the third tomboy butch character in Strawberry Shortcake, the first being Peppermint Fizz and then Raspberry Torte, and being followed by the 2021 version of Orange Blossom and the mechanic from the 2021 series. She wears green eyeshadow. She is the second character in the franchise to have highlights.

Sour has a more plain and casual look, she has a full purple medium length hairstyle with purple eyes and no head accessories on. Her skin is a bit purplish. She wears a white short sleeved t-shirt, a purple plaid skirt, pastel purple leggings, violet flats and what seems to be a lace choker. She has a minimalist and emo fashion style instead of her former punk and neon style.

Sour Grapes came into Berry Bitty Adventures as a last minute thought to replace tomboy, antagonistic characters such as Peppermint Fizz and Raspberry Torte (2003). Sour Grapes is much like her namesake. She appears to be generally in a foul mood and unpleasant to be around. She is often in a grumpy mood, and has a fiesty temper that can flare up any time. But she isn't that mean when you get to know her. She's a realist, not a pessimist. She has spunk and edge and does things with gusto. She likes to seem tough and brave. She's mischievous and likes to play pranks and trick people. She is competitive and energetic. She is protective of her sister, Sweet Grapes, and always tries to help her. They act like polar opposites, but they are best friends and love each other. Sour Grapes starts to seem a bit more 'sweet' in comparison to her cousin, the greedy and social media addicted Raisin Cane. Sour Grapes is often annoyed and groans at the schemes of her cousin. She is more intelligent and clever than the ditsy, head in the clouds Sweet. Sour's grumpy competitive personality makes her very similar to Angel Cake personality wise.

In the 2018 2D animated Youtube Series, Sour Grapes seems to have matured, just like Peppermint Fizz did in her transition from 2003 to 2007. Sour is still sarcastic and has a annoyed realist view, but she is much nicer. She is 'berry' nice to Strawberry Shortcake and Orange Blossom, and has found a close friendship with them. She loves her sister and helps her and is concerned for her. She's very clever and intelligent, often coming up with ideas to help her ditsy sister. She's tough and wants to be seen as brave and cool by those around her. We see in one of the shorts she can be insecure about being different from her sister.

In the series, she has became an antagonist and along with Bread Pudding and Raspberry Torte she passively participates in with these two's schemes to get Strawberry to leave the Berryworks. When doing the Mean Berrie's plans, she honestly seems neutral and apathetic about it, and just acts as a follower to Raspbery. She doesn't actually have a strong opinion about Strawberry being in the Berryworks, and just doesn't care. She is very expressionless, quiet and a bit cold. She's also quite judgy over clothing as the first thing she pointed out when Raspberry was mocking Strawberry was Strawberry's outfit being "matchy-matchy" in Mean Berries. So she probably likes fashion. She also likes gothic and creepy things. In "Lemon's Name In Lights" one of the few things she seems happy about is when she got to decorate the Christmas tree in a purple, gothic style with a giant skull on top.

She is mostly seen following Raspberry, but it is unknown how much she actually likes Raspberry. They don't often have friendly interactions, and Raspberry rarely looks at her. She just stands behind or to the side of Raspberry. Raspberry did give Sour a special credit card though.

You can often see her with: 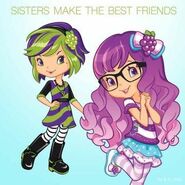 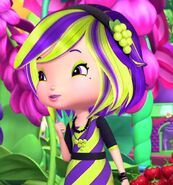 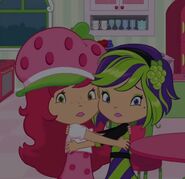 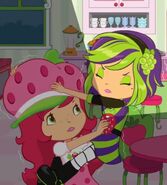 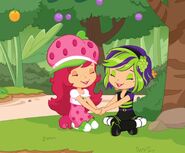 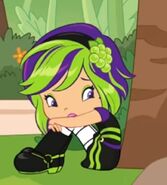 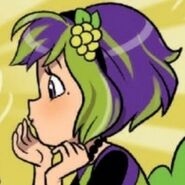 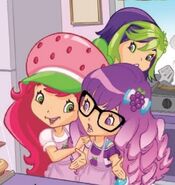