Not appearing on show
Seaberry Delight' was a shy and sweet new character to the Strawberry Shortcake series who appeared in The Mystery of Seaberry Beach and Legend Of The Lost Treasure. She lives in the Pink Lagoon and can easily be mistaken as a mermaid if captured with only a glimpse. She can communicate with the sea-sweeties who are the sweet fish who live in the lagoon. Seaberry Delight is 10-years old in 2005 and 17 in the 2007 time skip and lives on Seaberry Beach just like her neighbor and best friend, Coco Calypso.

Seaberry Delight loves going on beach adventures and finding interesting things. She can be very shy sometimes, but is very kind and loyal to the creatures in the lagoon, and loves to collect seashells. She is soft spoken and sweet to her friends. She is also shown to be a great story-teller and her stories usually have a moral to them. She spends most of her time in the water and because of this she often tends to the seaberry plants and uses the berries to feed her friends the sea-sweeties. She is definitely an introvert

Seaberry Delight has long blonde hair that reaches her knees. She has bright green eyes, and wears a crown made from seashells and coral. She wears a blue and bright green top with a seaberry in the center and long blue pants with dark blue swirl designs and green trimming that fans out at the ends to resemble a mermaid's tail. She also wears blue flip-flops. She has a seafoam blue swimsuit that reveals her stomach.

Seaberry has dyed her hair a silvery turquoise and her crown now has a kiwi on it. She has pink flip flops now.

Seaberry's pet is a sea turtle named Kiwi and has owned Kiwi since the beginning of 2005, and she still currently owns Kiwi.

Pistachio is Seaberry's official filly. Her mane and tail are golden blonde, her mask is white, she has brown hooves, and a light green coat with speckles. 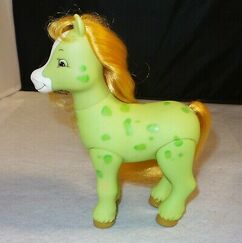 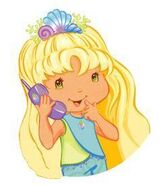 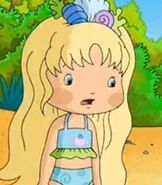 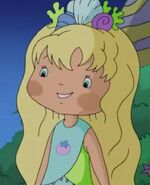 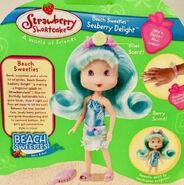 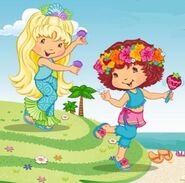