Rainbow Sherbert is a character introduced in the 2003 episode, The Costume Party. She is the captain of the rainbow float, which voyages the punch bowl pond. She has a pet toucan named Triple Treat. She is voiced by Laura Grimm. [1]

She has purple hair and eyes. She wears a rainbow sailor helmet and scarf. Her outfit also has a pink top with a symbol of sherbet, underneath it is a rainbow shirt with long sleeves. She also wears blue pants, a purple belt, pink shoes and yellow socks. 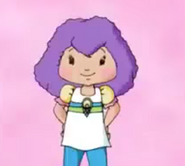 Add a photo to this gallery

Retrieved from "https://strawberryshortcake.fandom.com/wiki/Rainbow_Sherbert?oldid=9098"
Community content is available under CC-BY-SA unless otherwise noted.