Peach Blush was one of the last few friends Strawberry Shortcake met during the 1980's. She was featured mainly in merchandise, but also had big parts in both the last two Specials on Television. From "The Land of The Magnolias", she came to Strawberryland with the reintroduction of Plum Puddin' at the beginning of the fifth special. Along with the titular character of the special: Baby Needs-A-Name. Her pet is Mellonie Belle Lamb.

A delicate, generally nice and always polite southern bell. She can be a drama-queen sometimes and worries over the really simple things from time to time, even if nobody else has just yet. A little flirty, but really mature and always truthful about things.

Peach Blush is a fair-skinned girl with short, curly peach-orange hair and small hazel eyes. Her hair is normally worn with a gold hat with pink and white flowers on the top of it.

Her outfit consists of a very pale mint sweater worn under a short white dress with lines of red all over it. Along the bottom is a solid white band with small peaches lining it. She also wears light colored bloomers, along with the typical green and white striped pantyhose and a pair of peach flats with a flower at each toe.

In the specials, Peach's hat, flowers, and dress all lack their detailing, common to everyone else in them. Her dress is solid peach-pink, while her top under it is a very pale blue color, not green. 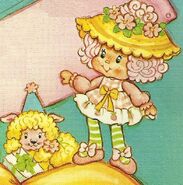 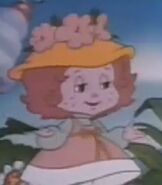 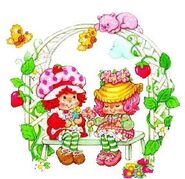