Pending to appear on 2018 Series

Orange Blossom is a girl with a handful to offer literally. She's usually a happy girl who loves to smile and make others do the same. Rarely ever is she selfish, as she believes that as long as others feel happy, then she'll be happy too. She is somewhat sensitive and most likely the first to begin to pout and add grumpy when she is not happy. She also happens to be one of the easier girls to annoy and quick to burst into tears, though she is always thoughtful enough to supply more handkerchiefs.

Out of all the girls, Orange seems to be the bravest, this is may be due to her reckless mood, in which she rushes into situations head-first not knowing the effect. She can also be very stubborn about things once her mind has been set on them, even to the point of not helping from anybody else despite knowing very well when she needs it. She is also not listening to others when she thinks her ideas are best and she struggles to see the viewpoint of others, as she wishes to prove how capable she is. But this also makes it hard for her to admit when she needs help or has to admit she may be afraid.

Despite general downsides to her behavior, Orange is a true friend who will help others the berry best she can. Whether it be advice, help, or just a shoulder to lean on. She often refers to her creativity when in need of assistance and can make new things with a snap of a finger to make the system more smooth. She loves to make things efficient and as perfect as perfect can get.

Like others, Orange Blossom's appearance changes by Year 1 and not changed until Year 4

Orange Blossom owned Marmalade butterfly ever since 1980 but is not owned her in Year 1. In Year 1, her pet is an non-specific bumblebee named Marmalade is yellow with orange wings, spiral orange antenna and a orange flower on her stomach. She also has a horse named Orange Twist, who has yellow fur with orange swirls. She has a blonde mane and a blonde tail with copper highlights. She has a white muzzle and an orange blossom on her tail and head. She also has a puppy named Marmalade. 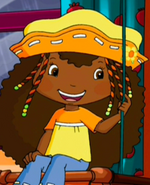 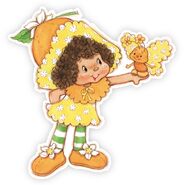 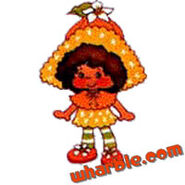 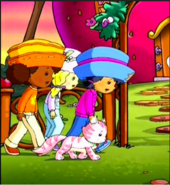 Add a photo to this gallery
Retrieved from "https://strawberryshortcake.fandom.com/wiki/Orange_Blossom?oldid=10161"
Community content is available under CC-BY-SA unless otherwise noted.