Pending to appear on the DHX Series

Lime Chiffon is one of Strawberry Shortcake's new friends she met mid-way through the 1980's series. She makes her first animated appearance in the third special. In her major appearances in the Specials, Lime was originally voiced by Melleny Brown. In the 2019 series, she is voiced by Macy Drouin.

In the original series, Lime is the bubbly, airy ballerina whose every action is filled with elegance and grace, even if she gets in the way sometimes. With high energy and a light mood, Lime can often be found with her pet, Parfait Parrot.

A girl with a "flighty" personality, it can be pretty hard to hold onto Lime's attention for long. She doesn't seem to pay attention to much, so often has to be called to or pulled out of the way. But then she'll simply dance away without a care. It has been implied that Parfait may actually be smarter than her.

Lime Chiffon is a cute green-themed girl with fair-light colored skin and small green eyes. She has grass green hair worn in a flared out bob-cut, worn with a two-layer, white and pink hat resembling a cake with a pastel pink scallop-lined bottom piece. On the center of the cake is a green string bow. Lime wears a mint-green dress with white frilly sleeves and ribbon lining the bottom with a daisy every few inches. Her pantyhose are the basic green and white stripe, while she wears a dull pair of ballerina flats. She is normally seen in girly, flamboyant poses. 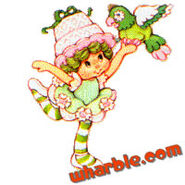 Add a photo to this gallery
Retrieved from "https://strawberryshortcake.fandom.com/wiki/Lime_Chiffon?oldid=9096"
Community content is available under CC-BY-SA unless otherwise noted.