Pending to appear on the 2018 Series

Lemon Meringue is one of the original characters in the Strawberry Shortcake Franchise. In the 1980's series, she had a pet frog named Frappe. This pet was changed in the 2003 series to a skunk named Sourball. In the 2009 series, she has a dog named Henna.

Lemon had a poofy yellow hat. She had a dark green headband underneath it. She had her curly blonde hair in pigtails, which were tied with daisies. She wore a long-sleeved yellow top with a white collar and mustard yellow polka dots. Her skirt bears the same pattern. She wears green and white striped leggings. Her shoes are mustard yellow with yellow bows.

Lemon was tan and had bright blue eyes. She has long waist length pale blonde hair. She wore almost entirely yellow, sporting a yellow tank-top and yellow capri pants. She had yellow slippers with little flowers.

Lemon has fair skin and bright blue eyes. She has long, waist-length blonde hair with her bangs mostly brushed to the right. She wears a small amount of hair in sectioned pigtails on each side of her head, held by two green bows. A lemon wedge clip rests on the left side of her head. Her lips appear pale tea-rose.

Lemon wears a yellow blouse with elbow-length sleeves held up by white ruffled cuffs. At the middle of her chest is a lemon wedge design, while below it is a green and pale blue striped ribbon. On each side of her torso is a lemon wedge design, while her skirt is a sky blue light pleat with lemon design on the right. She also wears pale gold flats with three tiny markings on each toe to resemble a slice of lemon. Her leggings are white and neon yellow.

Despite her sour name, Lemon is very sweet. She is kind and caring to her friends and she always tries to work as hard as she can to make others happy with her stylish techniques. Much like Raspberry she spends a lot of time trying to create something new and stick to the latest trends, and while she may get a little frustrated she usually has tons of fun trying. She loves to chat and knows a bit of gossip, but she doesn't usually dabble in anything that could hurt the feelings of someone else.

She is normally very cheery, but she does sometimes worry over her place in Berry Bitty City. She often shows concern about being rejected and can be sensitive or self-conscious. She gets embarrassed pretty easily and will hold up in her Salon until she can rid of any disasters she may have brought upon herself. She is the type of girl to easily cry or get upset if offended, and due to how serious she takes her work, she can get pretty angry if someone offends her; though she will try to be open-minded to hear others out.

Lemon can also be a little bit ditzy from time-to-time. She is highly determined when it comes to doing things though, giving her a somewhat stubborn and competitive streak. She is rather feminine but is always up for some fun, whether it be going on an exploration or playing sports.

She and Blueberry Muffin are best friends. 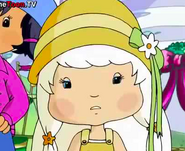 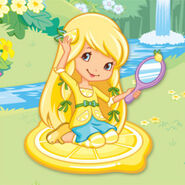 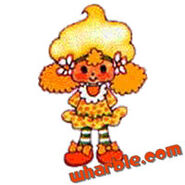 Add a photo to this gallery
Retrieved from "https://strawberryshortcake.fandom.com/wiki/Lemon_Meringue?oldid=9745"
Community content is available under CC-BY-SA unless otherwise noted.