Strawberry Shortcake Wiki
Register
Don't have an account?
Sign In
Advertisement
in: Characters, Introduced in 1980s, International Characters,
and 2 more

Not appearing on show
Lem and Ada (a pun on lemonade) are twin brother and sister, from England's "Pickle-Dilly Circus", a parody of Piccadilly Circus. Although the same size as other babies in the series, the twins seemed to be especially precocious. Not only did they speak quite well, they even finished each other's sentences. Although it is fairly obvious by looking at them which twin is Lem and which is Ada, apparently telling them apart was problematic for those who lived in Strawberryland. Only their pet sheepdog Sugar Woofer seemed to know for sure.

Although the same size as other babies and toddlers in the series, the twins seemed to be especially precocious. Despite being so young the twins can speak formally and quite well, and are known for finishing each others sentences. This implies that the twins may be pretty smart, as they are also capable of doing the tasks other young ones cannot. Though, they still crawl sometimes.

Lem N Ada are twin brother and sister. They both share the same physical features and hair color/style, but can be told apart by their hair accessories. Ada wears a green and gold bow, while Lem wears a green hat. Both wear low green and white striped socks with a white and orange bib with a lemon on it. Lem's being golden-orange while Ada's bright yellow. Their outfits are also the same, but reversed in coloring. Lem wears a white top with red spots and a white bottom piece with gold lines all over it, while Ada wears a white and gold line top and white and red bottom article of clothing 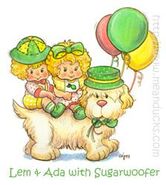 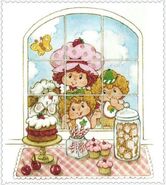 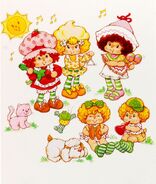