Strawberry Shortcake Wiki
Register
Don't have an account?
Sign In
Advertisement
in: Characters, Introduced in 1980s, International Characters,
and 4 more

During the fourth special in the 1980's Series, Crepe and the others met Strawberry when this trip all came to a house welcoming party when Strawberry moved from her shortcake home into a mansion. She is a fashion designer in Pearis in the 2003 series. Crepe's pet is Eclair Poodle.

Crepe is a pale-fair skinned girl with big black/blue eyes and very bright sky blue hair worn in a curly puff, resembling either a small afro or afro-pigtails (depending on angle). She has a small amount of bangs shown underneath her big red beret. Crepe dresses in a full body green and white stripe leotard/body suit, said to be for street dancing performance. Along with a red ruffle skirt with a white apron usually tied over it, and plain icy blue flats. Besides her colors being a lot softer/paler, Crepe doesn't look too different in the specials.

Crepe Suzette is fair-skinned and has purple eyes and straight, long pastel pink hair. She wears a red beret with a purple ribbon around it and a cherry. Her outfit consists of a white t-shirt with a purple collar with a cherry, red jeans with a purple cuff, and purple flats with red bows.

Crepe Suzette is French girl who mostly speaks English, but with a thick French accent behind it. She is a fashion designer in Paris who is extremely creative and skilled, she can sew quickly. Though, being a designer she can be a bit of a perfectionist and vain. She is an amazing dressmaker, she is a child prodigy to make things that amazing from such a young age, so she must have a high IQ. She is very kind and friendly to Strawberry Shortcake. She is very protective over her poodle Eclair and worries about her often. She thinks pessimistic quickly and cries often. Strawberry says Crepe is very fashionable. 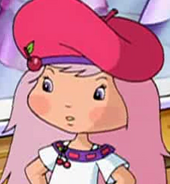 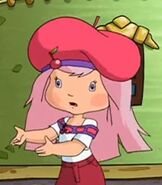 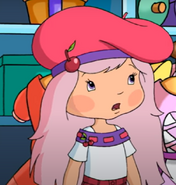 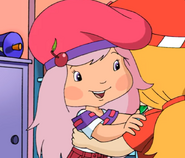 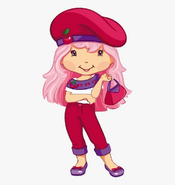 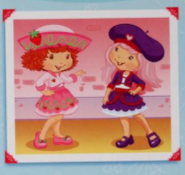 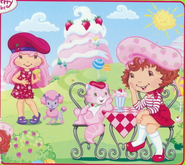 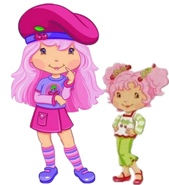 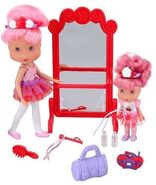 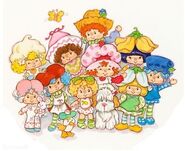 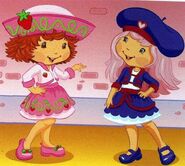 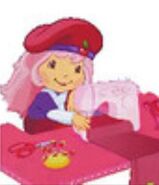