Bread Pudding is one of the main antagonists of Season 1 in Strawberry Shortcake Berry in the Big City. It was unknown if he was related to Plum Puddin'. Bread makes his debut appearance in Berry In The Big City and later episodes show him working with Raspberry Tart and her accomplice Sour Grapes to run Strawberry Shortcake, although his contribution to whatever plans Raspberry has on her mind isn't as big as Sour's contribution.

Bread Pudding is preppy male who has dull tan skin and caramel colored hair. His hair has a gelled swoop and he sports a side undercut. He has brown eyes. He wears a purple argyle sweater vest with a white long sleeve collared dress shirt, brown corduroy pants and typical brown men's dress shoes. He does not look like a child or preteen unlike most characters, but it is unknown whether he is a teenager or adult.

Bread Pudding is quite stuck up and snooty. He is rude and strict as he bosses everyone around. But he's also not very physically strong and can be whiny. 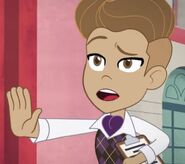