Strawberry Shortcake Wiki
Register
Don't have an account?
Sign In
Advertisement
in: Article stubs, Characters, Introduced in 2007,
and 3 more

Brambleberry Fairy,originally thought to be an anti-hero character first introduced as a fairy in the said episode, DiC/Cookie Jar has since admitted on the back of the Happily Ever After DVD that she is actually Angel Cake with her negative traits greatly exaggerated, hair recolored into purple, and skin tone darkened. She cursed Baby Princess Strawberry Rose to vanish forever if she gets her finger pricked by a brambleberry bush, although later Apple Dandelion weakened the curse, replacing vanish with sleep. Later in the story, she regrets ever making the curse and starts setting things right, such as bringing Strawberry Rose out of her sleep and apologizing for her early mistakes. In progress, she learns and understands forgiveness and friendship. 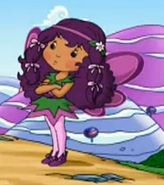