During the 1980's Banana Twirl was one of the final friends befriended by Strawberry Shortcake during it's initial run in the 80's. She appeared scarcely in merchandise and made small appearances throughout the final Strawberry Shortcake Meets the Berrykins Special, which is noteworthy with fans of the series.

In 2007, she was reintroduced as Banana Candy. Her outfit and personality had changed drastically. Instead of being the energetic girl she was before, she is now the Mayor of her own town Banana Boro. She seems to be skilled in engineering as well as several other jobs she learned to do in her town.

Like Lime Chiffon, most of her movement and thought process are about Dance, and passion. She is healthy and fit, and tends to move around quite a lot.

Banana Candy is still an energetic girl but now is the mayor of her own town. As well as governing Banana Boro, she also is a skilled mechanic. She has a southern accent. She starts off as a yandere but learns to let the girls leave. She takes a trip with them and becomes their friend.

While not too many official pictures were released, in the final special her common attire was revealed to be a white blouse with elbow sleeves, gold skirt, pale yellow and white striped pantyhose, gold leg warmers and dark green ballerina slippers. Her pigtails were held with green bows and she had a white sweatband around her head. Her eyes, when up-close are revealed to be ivy-green.

Banana Candy has long light golden brown curly hair with lots of blonde highlights, and she wears a yellow cap with a pink ribbon. She has pale skin and dark brown eyes. She wears a chic pink scarf over a plain white tee and yellow leggings underneath her pink banana print skirt. She also has a blue denim mechanic's uniform and a baby blue apron with a banana on it when she works at the cafe. In a toy package illustration she has a 80s/90s like big side ponytail. 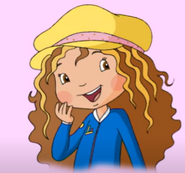 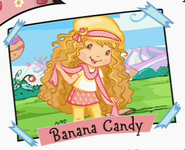 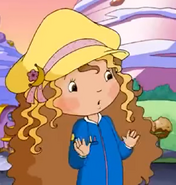 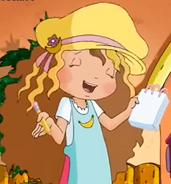 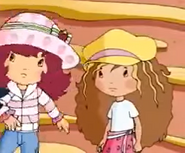 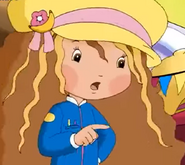 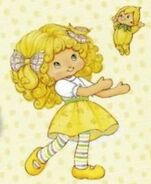 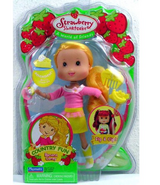 Add a photo to this gallery
Retrieved from "https://strawberryshortcake.fandom.com/wiki/Banana_Candy?oldid=12162"
Community content is available under CC-BY-SA unless otherwise noted.