Strawberry Shortcake Wiki
Register
Don't have an account?
Sign In
Advertisement
in: Characters, Outdated, Introduced in 1980s,
and 6 more

Pending to appear on Strawberry Shortcake Berry In The Big City

Apple Dumplin' is a baby character from the Strawberry Shortcake franchise. She is voiced by Rebecca Shoichet. She is usually related to Strawberry in some form.

Apple Dumplin' was the first baby characters introduced in the vast world of Strawberry Shortcake. Her doll was introduced in the first wave of characters, which also included Strawberry, Blueberry Muffin, Huckleberry and The Pieman. Although she is smaller and less independent than the older Strawberryland kids, Apple has also proven to be more than capable of taking care of herself when the situation warrants. Being just a little baby, she did not speak as yet but has surprisingly good penmanship skills and scribbles on paper to communicate with the others. She also had a pet named Tea Time Turtle.

In the 2003 reincarnation of the series, Apple Dumplin' was Strawberry Shortcake's younger sister and had a pet duck named Apple Ducklin'. She is still a "baby" character but seems to be a bit older than 1980s, being more like a toddler, as she walked and talked more in 2003. During seasons 1-2, she was a baby who spoke in few words and phrases from time to time. During season 3, Apple could then speak in full simple sentences, with minor grammatical errors indicating that she'd most likely grown a bit since the series premiere. She was a lot smaller than Strawberry and was usually seen sitting down. During season 4, Apple Dumplin' had grown to be a typical 8-year-old girl. She calls Strawberry "Big Sis".

Apple Dumplin' is now the same age as Strawberry. However, she is no longer her sister and is actually her travelling cousin, who owns a blog. She is a world traveler of Strawberryland. She visits on some occasions. She hangs out often with her best friends Lemon Meringue and Sour Grapes.

Apple Dumpling is a small baby girl, who is often seen sitting. She wears a simple yellow onesie with a red apple on it. She wears oversized scrunchie socks that are green and white striped. She has a simple yellow bonnet. Her hair is ginger and curly, she also has freckles.

Apple has the same ginger hair but it is more spikey and wispy, similar to Strawberries hair. In offical art and dolls she appears blonde. She has green eyes and round pink cheeks. She wears a dress that is similar to a Victorian era baby dress. It is yellow with an apple pattern, has a green collar with a red ribbon tie, red sleeves, and green gingham ruffle trim. She wears white lacey socks with little red mary janes. She has a hat now not a bonnet, it is pale yellow with apples, with an apple blossom flower on top, and the brim is white in the cartoon and green and white gingham in official art and books.

Apple's hair is now a darker red but still more orange than Strawberries. It is in pigtails with bows. Her hat was remade for her grown up head size but the flower was not re-added and it now has a red trim. She wears red capri jeans with a green trim ruffle, a plain white tee, and a light green denim jacket. She still has red mary janes.

Apple has blonde hair and bangs, with a side braid held in place by a plastic apple barrette. She has strangely unique grey silver eyes. She wears a red knit hipster slouchy beanie. She, like in 2007, wears a plain white tee, and has a yellow vest with a casual green belt over it. She has a red plaid skirt, and red boots. Her leggings are pale yellow and white. 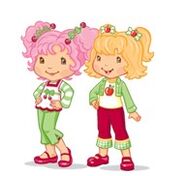 aged up apple dumplin with aged up cherry cuddler

even more aged up 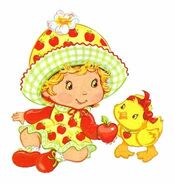 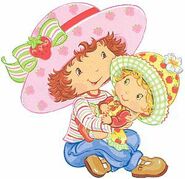 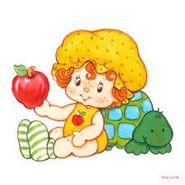 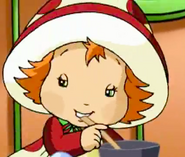 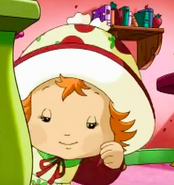 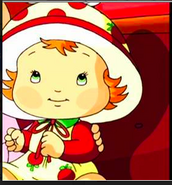 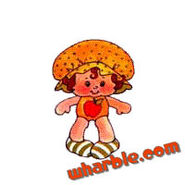 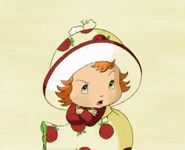 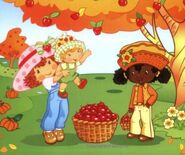 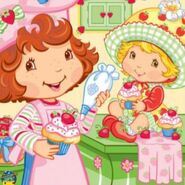 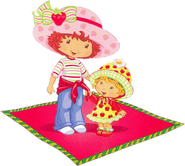 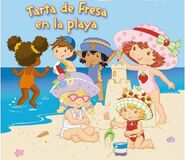 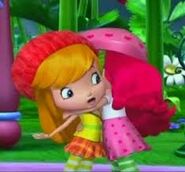 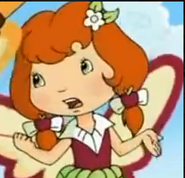 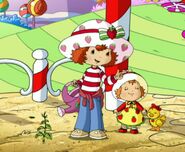