Strawberry Shortcake Wiki
Register
Don't have an account?
Sign In
Advertisement
in: Characters, Female Characters, Introduced in 1980s,
and 4 more

Overly polite Angel Cake seemed to take the "Angel" portion of her name a little too seriously. Never missing an opportunity to say "please" and "thank you", she even went so far as to play the harp and wear a halo-shaped headband in her hair. She had a pet skunk named Souffle.

This incarnation of the character of Angel Cake is very different from her original incarnation in the 80's. She even teamed with a different pet, a lamb called Vanilla Icing. The new Angel Cake is blonde and possesses a tremendous talent for cake decoration. However, she is also known to be a perfectionist and can become rather ill-tempered if things don't go her way.

Angel Cake is a young girl who happens to take the "Angel" part of her name very seriously. She's as sweet as can be and is overly polite with just about everyone, enemy or not. Almost all of her responses are consisted of "please" and "thank you", and because of this, she happens to be quite loved by others. One of her major flaws, however, is that Angel views herself as having weight problems. She doesn't seem to physically look heavier then the others but this may just stem from a low self esteem. While she diets, she made sure to have Souffle diet with her.

During 2003 to 2009 Angel Cake was portrayed as a normal girl. She is generally kind and friendly to others. She is also very polite and values table manners. One of her most notable personality traits is being a perfectionist and wanting everything to go the way she'd like it, especially when it comes to baking and decorating cakes, as well as playing games and sports. When things don't go absolutely flawless, she becomes frustrated, and she can even lose her temper and lash out at others if things really aren't going well. She often gets overly competitive because of her desire to show off. She is very artistic. She has tendencies to be very mean, and bratty but can hide it well. Sometimes she is meaner than Peppermint Fizz.

Angel Cake is a fair skinned little girl with big eyes that appear to be a deep shade of blue when looked closely. She has soft lilac-violet colored hair that is short and very curly, including her bangs which stick up and wrap around the gold "halo" worn on her head. The halo-like ornament has big gold bows on both sides of it. Angel's attire consists of a soft blue dress with white at the neck, puffed sleeves, and white bloomers. On her dress are pink-purple ribbons with bells attached. She wears the common green striped pantyhose and a pair of pale-lilac flats.

Because she has aged along with all the other characters, Angel Cake appears to be taller and older. Her hair has grown longer into a more mature style and is waist-length. Near the front of her head, part of her hair is tied into two "bubble pigtails", secured with pastel pink and purple ribbons tied in bows. Her outfit consists of a striped purple and white long-sleeved shirt, a cropped purple jacket, a denim miniskirt layered on top of pastel pink and purple petticoats, and knee-high white socks. Her hat and shoes are the same as previous seasons.

She has a pet skunk named Souffle in the 1980 verse. In 2003, she instead has a pet lamb named Vanilla Icing. 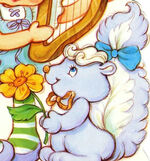 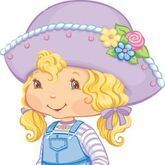 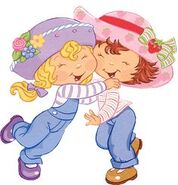 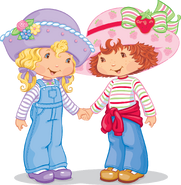 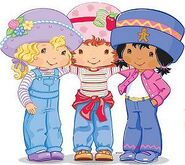 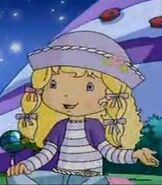 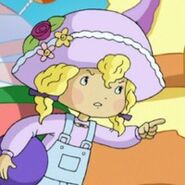 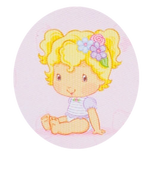 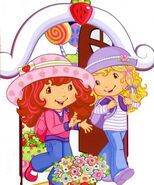 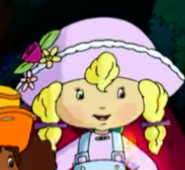 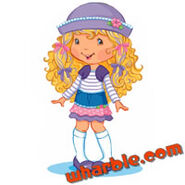 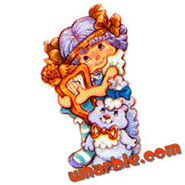 I'm Not Too Little - Strawberry Shortcake 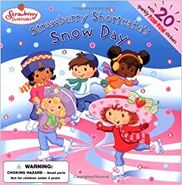 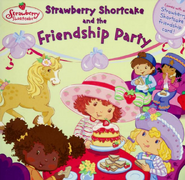 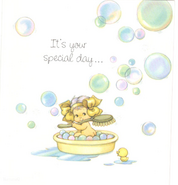 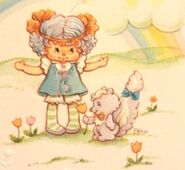 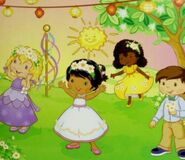 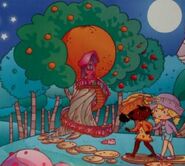 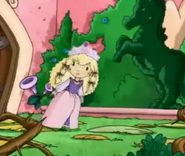 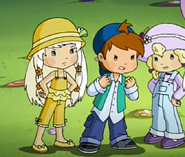 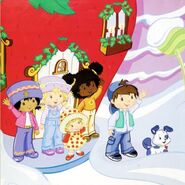 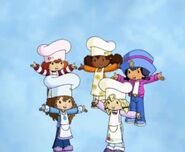